With Armed Forces Day on Saturday 27 June, I have the honour of sharing my experience of the two years that I spent in the military, before joining SES Engineering Services (SES) 15 years ago.

Working directly in construction had never crossed my mind when I was younger – I was always determined to be part of the Armed Forces. At 21 years old, I joined the Royal Engineers, and spent two years learning to be a Combat Engineer.

My time with the Royal Engineers was highly enjoyable – I loved the travel, the camaraderie, and the opportunities it brought me. However, in 2005 I suffered from a leg injury, meaning I had to be medically discharged from the military and search for a new career.

This was a huge U-turn for what I expected my career to be, but I was determined to utilise the skills I had learnt while in the military.

After a lot of research, I contacted a construction recruitment agency, which suggested I applied for a job at SES as a Pipe Fitter Apprentice. I was apprehensive at first as I had never worked in the construction sector before, but nevertheless it was reassuring to know that my skills were transferable and that I was to be working for one of the UK’s leading M&E specialists.

That was 15 years ago, and during that time I’ve worked my way up the ranks to become a Senior Project Engineer. I cannot imagine myself working anywhere else. What I love about working at SES is the number of landmark projects I’ve been able to work on, for instance, Greater Manchester Police Headquarters, SBS Barrow and One St. Peter’s Square. The variety means I can be working up and down the country on a weekly basis, every day is different, and there’s so much opportunity to gain experience. 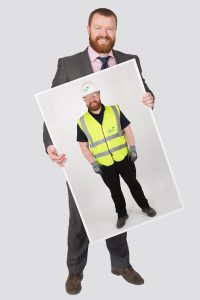 There’s lots of similarities between working in the construction industry and the military – such as the early starts, the hard-working ethos, and the banter between colleagues. If you are someone, like me, who was looking for an alternative to working in the military, I would highly recommend applying for a role in the construction industry – it opens up so many potential opportunities.

For this reason, I have spent the last two years volunteering at several charities, including Project Recce, which is a charity designed to help veterans find their place back in society – and have talked openly about how the construction industry can help them. This has included helping with employability support such as mock interviews, as well as arranging mentoring of veterans who are on an Access to Construction course. I feel incredibly strongly about this cause and it is something I’m keen to do more of in the future.